Most of you have gotten to know me as a writer here at RheumatoidArthritis.net. I do love writing—so much so that I’ve been lucky enough to make a long career in journalism out of it.

Before I discovered I could write, though, I drew. In fact, l’ve loved to draw ever since I was old enough to hold a crayon. My favorite subjects have always been animals. My style? Cartoons, sometimes in great detail and sometimes not, some more realistic than others, but always with bright color, whimsy, and joy worked in.

As a high school and college student, I learned to use more sophisticated mediums, like watercolors and oil and acrylic paints, but I always somehow came back to colored pencils, the grown-up version of the crayons I drew with as a toddler. I also loved pen and ink. Together, they were my favorite way to create my art. 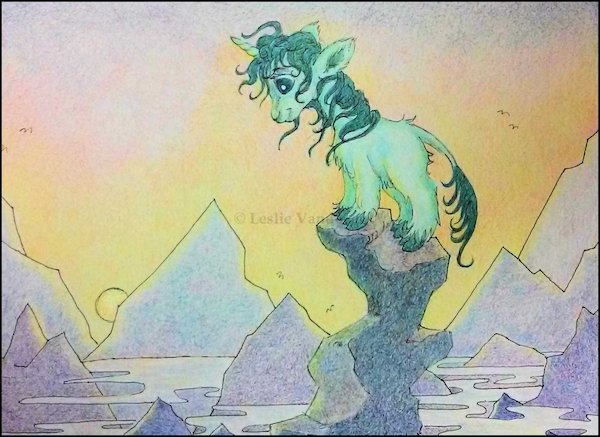 At least, that’s what I did until I was 31, when rheumatoid disease (my rheuma-dragon, as I’ve always called it) became a permanent and difficult part of my life. I was just starting out in journalism at the time (I had to pay my bills somehow!). In those early years, the disease caused painful arthritis mostly in my feet and larger joints, like my knees and shoulders. Those flares certainly slowed me down—and sometimes stopped me in my tracks—but generally for only a few days at a time. The disease only rarely attacked my hands, for some reason. And even when it did, the flares were mild or moderate, and I could still usually work on and finish my articles on deadline. I’d just use a light touch on my computer keyboard to write. I might not be able to do much else with my hands when they flared, but I always met my deadlines.

Drawing was another story. That required me to grasp a pen or pencil in my hand, flared knuckles, wrists, and all, and apply the point to paper using varying pressure to create fat and thin, long and short, sweeping and staccato lines. That was painful enough, but filling in colored areas evenly was usually too painful. I tried going back to painting instead, but that still required me to create an under-drawing with a pencil, and even holding a paintbrush hurt too much. Sure, there were days when my hands weren’t flaring, but scheduling my creativity to coincide with my RD dampened my spirits. After a time, I gave up drawing and sketching, falling back on writing instead. I could, I told myself, draw and paint just as beautifully with words.

And I did, for years that turned into decades. I got over my grief at not being able to draw anymore, though I occasionally gave it a try in the form of doodles. As time passed, my command of the strange, effortless link between my imagination and my hand I’d been born with deteriorated. I could still draw, I figured, but not very well anymore. And even a few minutes with a pencil made my hand ache.

Yearning to Create Art with RA

A couple of years ago I found myself with more time on my hands than I could figure out what to do with. I was working for myself as a freelance writer and had moved in with my ailing, elderly mother so I could take care of her. At my own home, there were always things to keep me busy in my non-writing time, including working in our front and back gardens outdoors. Now there wasn’t so much.

I started feeling this yearning, this yen, to draw again. So, with my RD under much better control thanks to a fistful of DMARDs (disease-modifying anti-rheumatic drugs) and NSAIDs (non-steroidal anti-inflammatory drugs), I decided to try. I saved my pennies for a while, then went out and bought paper, drawing pencils and pens, erasers, an electric pencil sharpener, and colored pencils. And one summer evening, wondering if I really could still draw, I sat down at the kitchen table with my supplies arranged neatly to hand, and gave it a try.
[caption id="attachment_25620" align="alignleft" width="550"] 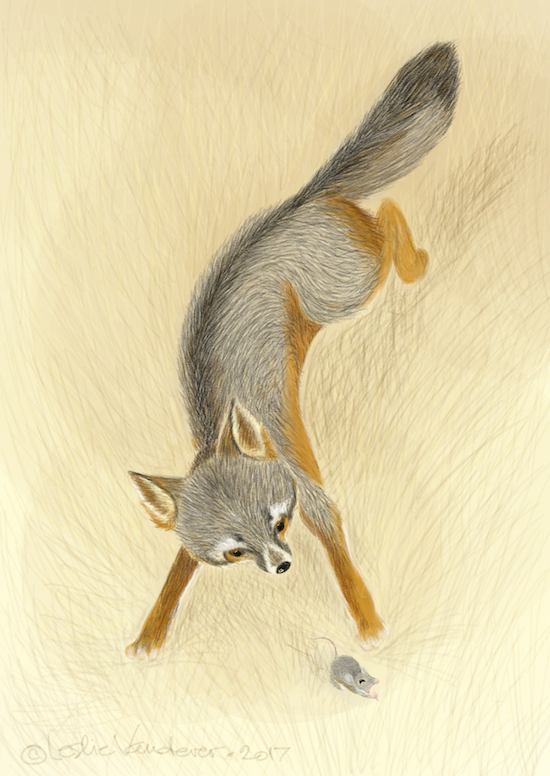 OMG—I could! OK, I couldn’t control my lines as well as I once had. And that imagination-hand connection wasn’t as nearly as strong and confident. But everything was still there. I still knew how. I just had to practice—a lot.

After that I drew nearly every day. I didn’t always produce anything good, but as time passed I could see I was getting better. There was just one problem: although I wasn’t suffering those awful flares in my large joints anymore—or at least, they were rare—my hands and feet were. They were constantly painful to some degree, some days worse than others. I began to run up against my old problem again: grasping the pencil or pen for more than a minute or two at a time hurt like a you-know-what. I’d have to stop and rest my hand frequently, cursing silently beneath my breath, hating the rheuma-dragon for trying to take this gift away from me once again.

I kept at it, though. When I wasn’t drawing or writing or caretaking, I started looking at the work posted by other artists and illustrators on Twitter. It was often simply beautiful and I wondered how long it had taken them to produce it. Sometimes they commented that they’d done a picture just that afternoon—and I’d stare at it, goggling. How? How in the world… 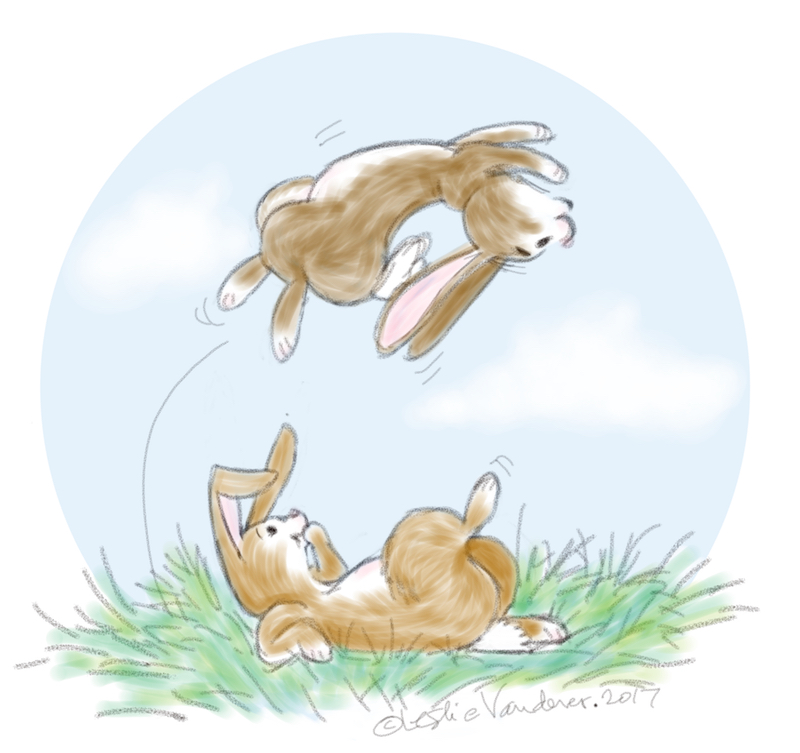 Many of them were using traditional mediums, of course. But some—maybe even more—were producing their art digitally. I asked how they did it, using Twitter. My fellow artists were so nice! They told me all about their art, suggesting the best digital art software and hardware, online tutorials, and offers to ask them anytime I need to know more.

Creating my art this way would be, I thought, a challenge and a compromise. I was willing to accept both, though. The alternative just wasn't going to cut it anymore.

It took me a while, but eventually I got a Surface Pro 4 tablet, the stylus that came with it, and some digital art software. The learning curve has been a long one, but just as with pen, ink, pencils, and paper, my digital art has slowly improved. 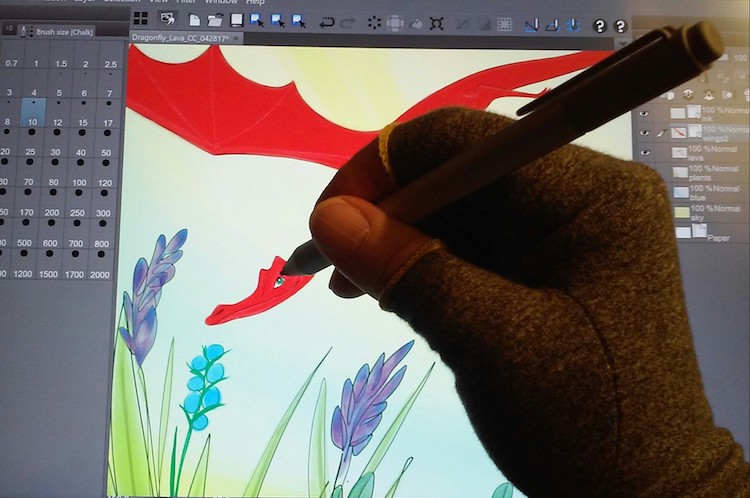 And here’s the biggest, bestest thing of all: I can draw with a gentle grasp and a very light touch using the stylus. It requires practically no pressure at all. I still have to stop now and then to rest my hand, and there are days when the pain is severe enough that I still just have to look at art instead of making it myself. Nevertheless, technology has given my old gift back to me in a whole new way.

Like my cane, my compression gloves, my lidocaine cream, and the rheumatoid disease drugs I take each morning and night, my digital art set-up is a tool that helps me overcome my rheuma-dragon. What more can I ask for?

Is My Pain Related to My (Lack of) Memory?

0 comments
This article represents the opinions, thoughts, and experiences of the author; none of this content has been paid for by any advertiser. The RheumatoidArthritis.net team does not recommend or endorse any products or treatments discussed herein. Learn more about how we maintain editorial integrity here.