If it Looks Easy, it isn't

The cover of the book was red, worn, and frayed. The pages were creased, the binding disintegrated, and the smell old and dusty. As I pulled it off my bookshelf and held it in my hand, I flipped it open to a page at random. I began to laugh and chuckle as familiar scenes came flashing to my mind and I became lost for a time in one of the most classic works of Spanish literature.

The book is Don Quixote de La Mancha, written by Miguel de Cervantes between 1605-1615, and completed only one year before his death. It is one of my favorite tales of all time. The plot is likely familiar, as it has been remade in endless forms of media and spin-offs — An aging man of fifty loses his grip on reality while reading romantic novels of medieval chivalry. His madness results in a quest of delusional misadventure, mistaking windmills for foes, inns for castles, poor servants for noble damsels, and all as in need of the service of a gallant Knight-errant.

There is a scene in Don Quixote that may depict the very first forms of what are now modern trampolines. After our noble Knight refused to pay his bill at an Inn since it would violate medieval custom, a group of local needle makers used a sheet to capture Don Quixote's squire, Sancho Panza, and throw him in the air with it. Apparently in the 1600's, "tossing a dog in a blanket was a Carnival diversion," and was being parodied as punishment by Cervantes.1

In the year 2000, trampoline officially became an Olympic sport and debuted in Sydney, Australia. The discipline had come a long way from being a device used by acrobats, circus performers, and enthusiasts, to a globally recognized event in gymnastics with rules of form and difficulty. The very first U.S. Olympian in the sport of Trampoline was Jennifer Parilla, and the U.S. Olympic Coach was Robert Null, both from Orange County, California. I met them in 1996, at the age of fifteen.

When I walked into the gymnastics center where Jennifer trained, I was floored. Sitting in front of me were four of the largest trampolines I had ever seen, with athletes flying more than twenty-five feet above the ground doing all kinds of flip and twist combinations I could never even have dreamed of: Triple flips with twists, double twisting double summersaults, and all kinds of crazy antics, done gracefully and in a row.

My mother had arranged a meeting for me with Robert, to see if I might be able to join the team. I was a self-taught acrobat and had been scaring my mother daily with crazy stunts, giant ramps, and a few very serious injuries. We both liked the idea of getting some proper training. When practice ended, and the trampolines were open, Robert introduced me to everyone. I was awestruck meeting a U.S Olympic hopeful and her training partners who were almost all one or two-time national champions. I was a kid who had been teaching himself tricks on the backyard trampoline so that I could take them to snow and the street, and for the sheer love of doing it. They were professionals. I was out of my league.

Getting inverted in the mid 90's. 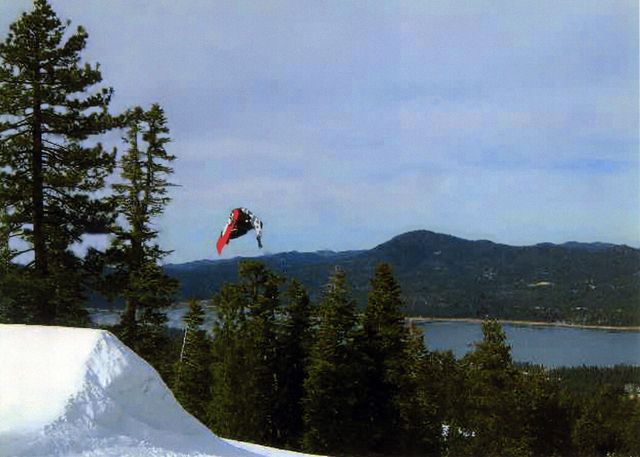 Robert wanted to see what I could do, so I took to the trampoline. I was nervous. As I began to bounce, I could barely control my body in the air. The beds were so different than the black nylon of a backyard trampoline, and the springs were more than double the size. After some time, I got the hang of it and began to do all of the tricks I had learned. Robert thought I had potential, and put me on the team.

I spent more than a decade with the group of Southern California trampolinists before I moved to a different state to pursue my love of freestyle snowboarding. It was an amazing time in my life. We practiced every day together, traveled, and even put on shows across the U.S. and in Europe. Jennifer competed in two Olympics and was inducted into the U.S. Gymnastics Hall of Fame in 2010. Another teammate, Logan Dooley, was the Olympic alternate in London.

While the Olympics were live in Rio this summer, I found myself reflecting on how much of an athlete's struggle is not captured by those few moments we see in the media coverage. The world's stage is only a brief fragment in time surrounded by glamorous excitement and celebration. It is impossible to capture the daily monotony, the frustration, the injuries, the doubt, and the banality of practicing the same skills hundreds of thousands of times over decades. These athletes who are the best in the world make it look simple.

The daily reality of having Rheumatoid Arthritis can also be invisible to the onlooker, and certainly, can lack appreciation from those who never see it. When friends and family come to our house, they do not see sharps containers filled with empty syringes under the bathroom sink, those necessary evils that cause me illness, sickness, fatigue, and difficulty. They do not see how much my wife and I struggle to maintain a modicum of appearance with two kids, two jobs, and RA. When I am in the classroom, the days that I stayed at home tossing and turning in misery, pain, and anguish, are indiscernible. When I am well enough to still fly high into the air on a beautiful competition level trampoline, the tears of joy and sadness in my eyes are only known by me.

Onlookers simply do not see the majority of the effort, pain, sadness, frustration, and willpower that comprise the daily reality of living with rheumatoid arthritis. One thing I really want those without RA to know is that if it looks easy, it isn't.

Christmas Is Not Always Full of Happy Memories

13 comments
This article represents the opinions, thoughts, and experiences of the author; none of this content has been paid for by any advertiser. The RheumatoidArthritis.net team does not recommend or endorse any products or treatments discussed herein. Learn more about how we maintain editorial integrity here.

Check-in: As we start a new year, how are you feeling?