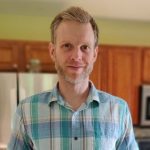 The race to the hospital was underway, as traffic, that doltishly stupid necessity of modernity, elicited my angst. I followed the line of brake lights down the only major thoroughfare that leads to the University Rheumatology clinic like a mindless herd animal. The mud and sleet of wet winter streets thrown airborne by passing buses slapped the hood of my car. Amidst the consortium of medical facilities towering into the sky and sprawled across the landscape, a children’s hospital gleamed in the emerging afternoon sun, reflecting the image of the main hospital sitting adjacent to it. A neighboring emergency room cradled the foothills of the mountains like an expectant soldier awaiting the pain, suffering, and loss soon to cross its threshold. An incomplete puzzle of medical school buildings are interspersed between these three giants with pieces here and pieces there.

A colossal holiday wreath hung from the luminescent windows of the upper floors of the hospital. It’s green needles and bright red bells looked down on the crowded circle where patients are dropped off, and family members rush in and out of revolving doors with tears in their eyes or anxious looks on their faces. All day long the wreath is greeted by the squawks and roars of the parking garage menagerie and valet service as they howl out the presence of another visitor. Reflecting on my health, my wife, and our kids, all affected by my difficulties in living with rheumatoid arthritis, I concluded that the season is from merry. Making my way to the gates of the medical metropolis, I felt both an appreciation for modern science, and a singular revulsion for bureaucracy — that pile of dotted i’s and crossed t’s that is now so lengthy, overwhelming, and all consuming, that human strivings in the balance of health and wellness are reduced to the latest policy update and required signature.

The crowded entryway, with persons sprinkled throughout like a toddler-ransacked chessboard, greeted me as I began making way through the labyrinthine hallways to my destination. Quickly passing the line for coffee, dodging around others walking slowly arm-and-arm with a loved one, and swerving this way and that to avoid collisions with the humanity coming and going, I hustled to be on time. Ten minutes late, and I would be rescheduled for another day, possibly weeks in the future. It is a harsh policy. Yet, never have I waited more than fifteen minutes from my time of arrival to greeting the doctor. The clinic is ruled with a smile and a big stick. If you are on time you get the smile.

A sharp turn to the right after striding through Disneyland like crowds, and I was in the waiting room, on time, making a copay, initialing new documents, and trying to tune out the blasted sounds of the televisions. Propaganda, advertisements, nonsense, and the latest scandal to appear in the society of the spectacle, where a celebrity’s private loss is public entertainment and a boost in advertising revenue, polluted the otherwise tranquil atmosphere. Individuality, that specter that haunts and reminds me of times past, prior to illness, when I had the luxury of infrequently encountering the prods, inspections, x-rays, lab work, and endless tests and measurements of my corporeal existence, is grasped for when I feel myself a number, a data point, and a next-in-line. Losing myself briefly for a time with a novel in my lap, I awaited the chirping call of the nurse who would usher me in to see the good doctor.

Alienation, a word forever reminiscent of historical materialism, revolution, the proletariat, and the prophet, seer, and revelator of liberal arts departments is a good fit for the sensation of losing one’s sense of self in illness. The diagnosis of rheumatoid arthritis and the life that would follow placed an irrevocable divide between my past and others who live without chronic disease. Young, at the height of two decades of athletics, with three state championship cycling victories, a history of travel and acrobatics, and years filled with risk-taking, stunts, and adrenaline, the inevitable faltering of health greeted me early. Unhealthy lifestyles may contribute to disease and chronic illness, but in cases like mine, living at the pinnacle of one’s health does not keep at bay diseases laying dormant in deoxyribonucleic acid. How to explain this divide, this sense of not belonging, of inhabiting a different world, where my concerns are so different from my peers and my previous life? Often I feel alone, though surrounded by people, lost though I know my way, and detached, though in touch with that pulse of life that is realistic worry about the future.

The good doctor smiled upon greeting me and began to speak in a flurry of words. “How have you been?” she asked, and before allowing me to answer, “How is your pain?”

“The pain is gone at the moment,” I responded. “I had a few flares this last month or two. They lasted three days at most. Moderate in comparison to before. Shoulder, feet, hands, and wrists. The usual suspects.”

She followed up with another flurry of related questions, paused, looked through my chart notes, and announced that it was time to change medications, to try something new. This is the fourth medication regime change in two years.

“Why?” I asked, incredulously.

“It is not enough to reduce the frequency and intensity of the flares.” She stated categorically, in the clinical manner I am so fond of.

It is no one’s fault that I have this disease. I am happy to have an array of treatment options, even though the risks are high. I don’t care about the meanderings through illusions, rhetorical sleights of hand, and bothersome politeness in communicating facts about my health or my future. I care only about making the most informed decisions possible. The good doctor, she never let’s me down when it comes to being straightforward: “The periodic flares are a sign that we have not controlled the disease,” she said while looking me in the eye and observing my reaction. “It is better, yes, but not good enough. You are young. The longer you have this, the worse the outcome. We need to be aggressive.”

I stared at my fingers, no longer swollen up like giant sausages. “I thought things were going well,” I began in a lugubrious tone. “I can hold my child most days, I can work, and I can ride my bike again. The side effects are virtually non-existent. A few days a month spent in pain are okay with me as long as it is not like before.” When the disease finally set up permanent residence after a few months of ghostly appearances, excruciating pain permeated every second of every day. Frequently I found myself face first on the floor, shoulders heaving, despondent and utterly defeated.

“I understand,” she responded, ” but uncontrolled RA now will be a disaster later.”

Saddened that I have become a human dartboard, where syringes twirl, needles dripping, across time and space to see if they land on the mark, I tenuously asked questions about the next treatment. My doctor is kind, and understood my frustration, worries, and preoccupations. In my string of collecting information that I will chew on in the days to come, the words “we don’t know enough to say definitively,” were frequently repeated. Then she printed out everything I requested, providing me with the start of the research I will do for hours on my own. I want to know everything, be prepared, and fully understand my disease and what we are doing. Knowledge, no matter how bleak, is an ally in the fight for my health.

Driving home, I felt simultaneous appreciation for having a sharp but caring doctor, marvel for the efficiency of the clinic (I had x-rays and blood work done within thirty minutes, and the specialty pharmacy called shortly after my visit to arrange delivery of the new meds), and a sadness that my lot now includes these details, arrangements, appointments, and concerns. Rheumatoid Arthritis altered the fabric of my existence, immutably demarcating my life into distinct periods: life before RA, and life with RA. I am grateful to the many caring professionals who help me deal with this uncertain, unpredictable, and pernicious disease.