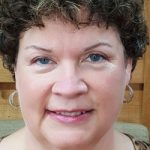 I am currently 56. I was diagnosed with fibromyalgia in 2005. Trazadone was the drug of choice then, and was miraculous for me. I slept better and had less pain and fatigue. There were many severe stressors in my life during that time: mental illness in the family, job stressors, celiac disease in the family, sole provider for family of four, knee pain and injury, etc. After my husband’s death, I realized my symptoms were much worse. My finger and toe joints were very swollen and painful. The trazadone was not working as well.

Advocating for a rheumatologist

I insisted on a referral to a rheumatologist of my choosing, and went to the appointment. I realize that I am truly blessed to have found “the right” rheumatologist on my first try. He is caring, kind and keeps me in line! All the tests were negative, CRP, ANA, RF, ESR. He added Savella to my meds and said he wanted to watch me closely. In August 2011, I went to his office in almost complete shut down. I had severe pain everywhere and could no longer cope. As I sobbed in the patient room, he held my hand and promised he would get me through this. After 4 months, we found I had a severe vitamin D deficiency, and I had to change to a part-time job.

A year later, my rheumatologist decided I had enough symptoms to warrant treating me for RA, even though my tests were negative. We tried sulfasalazine, and added methotrexate. No real improvement. Started Embrel, which I had a bad reaction to after 3 months. Then I had my first knee replacement in 2014. And we had confirmation of my RA-the lateral side of my joint had been eaten away by RA! Soon after, the Vectra DA test became available and showed I had moderate RA.

I failed a trial of Humira due to side effects and lack of response. We then tried Xeljanz. What a difference! I now work full-time and only have flares once a year.

Fatigue is still a battle, and I have to pace myself more than I would like. Understanding my limitations is an ongoing learning experience. I bike ride and swim for exercise. When possible, I get massages. I really don’t have much choice in jobs because of my limitations, but I am grateful for what I do. RA has caused me to learn more about myself, my body, and my limitations. RA has also caused me to develop patience! I use humor when it’s really bad, as well as my faith. I look at RA as my excuse to read books (one of my passions) and not go bungee-jumping!

I realize that RA shapes my life, but only to the extent that I let it. I struggle, but constantly remind myself that I am a person who lives with RA, NOT an RA patient.