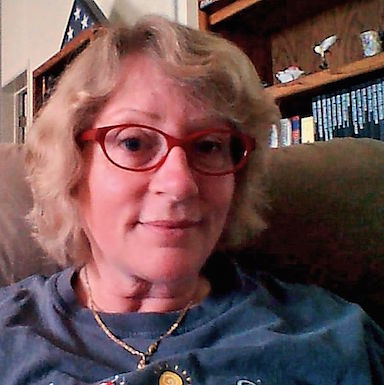 Wren is a professional journalist, graphic and fine artist. After serving for four years in the U.S. Air Force, she worked as a graphic artist and typesetter, and in late 1986 moved to Bremerhaven in Northern Germany, where she lived near the U.S. Army post there with her AF husband and six-year-old daughter. For the first year she was an illustrator for the post’s Recreation Dept., then became a reporter/ photographer and editor for the Public Affairs Office.

After returning to the U.S. in 1993, Wren took a job as a graphic designer with the oldest newspaper in California. Soon after that, she became a reporter/photographer and editor for the same paper. Later she became the managing editor of a small town weekly newspaper, remaining in that position until 2006, when the owners downsized and laid her off.

Since then, Wren has made her living as a free-lance writer and photographer.

She was in Germany when she started experiencing transient but often intense pain and stiffness in various joints. One day it was a knuckle, another her toes, and still another, a shoulder. There was no explanation for the pain, so at first, she thought she’d injured herself somehow without noticing. It sounded impossible, but she didn’t know what else to think. When the joint pains continued, started lasting longer, and moved to her knee, she finally went to the doctor.

Wren was lucky. Her doctor, a young Army internist, listened as she described her symptoms and immediately ordered a blood test. When she followed up with him a couple of days later, he had her diagnosis. She had rheumatoid arthritis. And she was only 31 years old.

It was a busy period in Wren’s life. Although her RA frequently disabled her with flares that lasted from eight hours to four days, no one told her that she should slow down, or that the disease could stop her. She covered day-to-day military news and events for the Army post and with the people of Bremerhaven, a North Sea harbor city. She covered the local U.S. Army’s role in Operations Desert Shield and Desert Storm (the Gulf War). Wren covered the local reaction to the dramatic fall of the Berlin Wall, and not long after the Soviets left, had the honor of being among the first Westerners to freely visit Eastern Germany.

It wasn’t all work, though. In her free time, Wren also skied in Austria’s magnificent Alps. She often rode her bike for miles along the North Sea, and with her family, wandered with wonder and delight all over Germany, Denmark, the Netherlands, Belgium, and Austria. She did it all in defiance of her RA.

In 1999, back in the States and working as a journalist, her RA went into spontaneous remission. For six years she was nearly symptom-free, so it was with relief and delight that she threw herself into an active lifestyle that included hiking, backpacking, and fishing in the high mountains of the Sierras. At work, she covered everything from whitewater rafting to wildfires. And while she was grateful for the gift of remission from her RA, she didn’t want to think about it too hard. What if she jinxed it? What if it came back?

And of course, in the late spring of 2005, it did. Initially, it took the form of a couple of large, lumpy, painless deposits of synovial pannus tissue that hardened on the outside of her right wrist. An orthopedic surgeon recommended removing it before it could cause any further damage. He also encouraged her to see a rheumatologist.

She underwent the surgery, but she didn’t follow up with a rheumatologist. Wren’s understanding of her disease was scant. She knew it was incurable. She knew it could be dreadfully painful, and that it could, maybe, disable her permanently. But the drugs her doctor in Germany had prescribed for it—a long series of NSAIDs (that tore up her stomach, one after another), oral gold, and Plaquenil—hadn’t had the least effect on her disease. The only pills that did help were narcotic pain meds, gifts from heaven that actually eased the pain. But doctors, she’d discovered, were suspiciously stingy about prescribing them, even though she had a legitimate need. In Wren’s experience, doctors were more worried that their RA patients would get addicted than they were about the excruciating pain they endured.

And that being the case, she reasoned, if she wasn’t in desperate pain, why bother going to a doctor again?

About 18 months later, Wren’s newspaper downsized and laid her off. Her RA was slowly getting worse, causing her hands and wrists to twinge and ache again, but now she had no health insurance. After about a year of searching unsuccessfully for a job, she was able to get disability-related health care through the Veterans Administration. She didn’t have much hope, but it was time to do something.

So, for the first time since Wren’s diagnosis, a real rheumatologist started treating her RA. He prescribed DMARDs she hadn’t heard of before—three of them, eventually taken together as a sort of cocktail—and her disease progression slowed to a crawl. When her pain got bad enough to keep her from sleeping and to cause occasional disability, her rheumatologist prescribed carefully controlled pain medications without the demeaning suspicion and lectures.

With time on her hands, Wren got online and began researching her disease seriously, determined to add to her bare-bones understanding of RA. Her doctor in Germany had told her little about it, and at the time, she didn’t even know what to ask him. She’d simply accepted that she had RA—as weird as that was—and got on with life as best she could.

Her new rheumatologist was a veritable fountain of facts, though. He took real pleasure in educating her about the disease, encouraging her to do her own research and ask him all the questions she wanted. What she learned was often sobering and scary, but tempered with hope, as well. There were new, amazing medications available, with more always under development. And she learned that the search for a cure was ongoing.

In all the years since her diagnosis with rheumatoid arthritis, Wren had never met or talked to anyone who had RA. Her family had always been loving and supportive of her as she struggled with it, but they couldn’t really understand her pain, her disability, or her growing fear for the future.

The Internet, however, could provide her a way for her to make contact with others who shared the disease. Maybe, the thought, maybe she could even talk to some of them! Blogging was rapidly increasing in popularity, and it was easier than ever to start one. Why not do it?

Wren called her new blog “RheumaBlog.” The purpose was to write about living well with rheumatoid arthritis, something she’d always done—mainly because she figured she didn’t really have a choice. By writing about her ongoing journey with RA, Wren hoped to help others who also had the disease and were searching for answers, encouragement, solace, and community.

It worked. RheumaBlog was and continues to be a success. Since its inception in 2008, thousands of readers have visited Wren and her blog. Among them were many who, like her, wished for a warm, friendly RA community. Together, they formed one—and in doing so, joined the larger RA patient community online.

Wren still makes her living as a free-lance writer and editor, and she’s a proud patient advocate for those with rheumatoid arthritis and other autoimmune diseases. She’s also her elderly mother’s sole caregiver and lives with her full-time. In her spare moments, Wren creates works of art with watercolors, colored pencils, and ink; reads voraciously; writes blog posts; and goes out of her way to look for the gifts life offers each and every day.

You can reach Wren at RheumaBlog in the comments section or via email. You can also talk to her here, in comments, at RheumatoidArthritis.net.

Click here to read all of Wren’s articles on RheumatoidArthritis.net

RA In America Survey: What Is That?