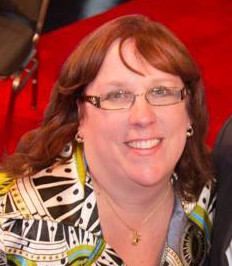 Paula Jayne believes in the words of her idol RuPaul: "The key to navigating this life—don't take it too seriously. That's when the party begins." She was diagnosed with rheumatoid arthritis as a teenager, when she was too young and stupid to take it too seriously, and with breast cancer (currently in remission), at 50, when she was too old and smart to let it destroy her. Paula Jayne’s party began in Philadelphia, where she grew up and continues to call home. She keeps that party going by refusing to focus on what she cannot do because of RA, instead saying “yes” to every new opportunity and adventure that comes her way. (Except skydiving. That’s a firm no!) She fortifies this resolve through frequent napping.

As a graduate student, Paula Jayne worked three jobs en route to earning her Ph.D in English, dreaming along the way that one day, she would have just one job. After a stint in the Philadelphia Prison System (as an instructor, not an inmate), Paula Jayne achieved that goal, launching her career in corporate consulting, where she worked with several firms and in multiple roles for more than 20 years. Along the way, she saw the world, built an amazing network of colleagues and friends, and worked on projects that made a measurable difference in the day-to-day lives of real people. She also realized that the pace of this work, coupled with RA, was taking enough of a toll that she was beginning to take life too seriously, having little time for the party because it was all about the work.

Paula Jayne has now brought a healthier balance back to her life by working as a freelance writer and speaker, and as the Principal of Lyric Professional Development, a consulting practice centered on the design, development, and delivery of sales and leadership learning programs. (It turned out that three jobs ARE better than one!) Her practice specializes in the healthcare market, and she leverages her now extensive experience as a consumer of healthcare to improve the quality of service her clients deliver to patients. She is grateful for the Affordable Care Act, without which she never would have been able to pursue a freelance career, and participates in activism to ensure the law continues to protect those with chronic conditions.

In her spare time, Paula Jayne loves to host parties large and small at her suburban home, which she has lovingly named The House of the Rising Squalor, and at her little retreat on the banks of the Chesapeake Bay, where she has begun to recognize the joys of glamping. She knows the keys to a good party are good food (she is an accomplished cook) and good friends (with which she has been blessed many times over). She also embraces the idea that the only thing in this life better than a little bling is a lot of bling. Especially if it is pink.

Like most people who have faced chronic illness, Paula Jayne has many patient war stories to share. These stories have made her a passionate advocate for patient-centric medicine, collaborative medical decision making, and patient access—particularly with respect to insurance and reimbursement. She hopes her war stories, served with a dose of good humor, will help others who face the same struggles.

Click here to read all of Paula’s articles on RheumatoidArthritis.net

I Spent Most of My 20s Asleep