Things That Fall Apart Can Be Sutured Back Together 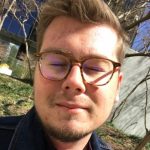 The body is the site of untold stories. As a 21-year-old college senior who has only recently been diagnosed with RA, I am struggling to flesh and shake out the story of my body, to tell the story of how I arrived at this disadvantageous position in what is supposed to be the prime of my life.

I venture to say that that story begins in May 2018.

During this time, I began having unexplained joint pain in my left hip and both hands and feet. At this stage, the beginning of most mornings was not too cumbersome. Some stiffness and some pain, but nothing alarming. Towards the middle of May, however, I experienced what I retroactively realized was my first flare. I remember waking up in the middle of night with the feeling that my hip was on fire, a searing sort of pain that scared me into a doctor’s appointment. Because I was not having classic signs of RA (yet), no blood tests were conducted, and I was sent home with orders to rest and ice. After three days, the pain went away, and I thought all was normal. Despite having two more similar flares for the month of May, I paid no attention to the pain: I was preparing to study abroad in London the next month, and the prospect of travel occluded my condition at the time.

In London, life was beautiful. The air was clear and medicinal, inebriating me with a sense of adventure and wonder at this peculiar thing called life. Walking around SoHo, Trafalagr Square, and Tavistok Square (one of the places Virginia Woolf lived, and as a literature major, a frequent pilgrimage site), visiting the Caffe Nero on Tottenham Court Road, the Foyles Charing Cross Bookstore, the Blackfriar Bridge, life had meaning. I would not be stopped by the little amount of pain I felt during this month. While my feet were occasionally swollen, while my hands were frequently red, and my wrists wrapped in braces, I felt as if the world was at my feet, displayed in front of me, as Sylvia Plath says, like a “ripe, juicy watermelon.”

July, August, and September all bled into each other.

If I must confess, I do not really remember much from these months. More frequently, mornings began with a limp. I relied more and more on my wrist braces that I had previously used for carpal tunnel. Eventually, however, I returned back to college, only to find that, one searing September morning, I could no longer close my hands on my comforter in the mornings. I quickly rang my doctor and requested an appointment. The morning of the appointment, I was walking down the stairs of my apartment, one at a time, and limping towards my car. I stopped halfway and looked up, watching the grey puffy clouds barreling across the hidden sky. In those clouds, I saw pain and desperation. “There is something wrong with me,” I thought to myself.

The results from the numerous blood tests conducted that day confirmed my suspicions: my rheumatoid arthritis factor was very high, prompting a referral to the rheumatologist. Then, in October, came another round of blood tests and x-rays. All of the evidence was there: I was officially diagnosed and put on medication for RA. Immediately after the diagnosis, however, my whole life came to a screeching halt. My plans for the future had to be rearranged; my dreams of graduate school had to be pushed back so that I could have time to figure out a treatment plan; and, most importantly, I needed time to sort myself out.

The diagnosis had happened so quickly that I really had no time to process it.

Now, I am in a place to figure it and myself out. I find myself, now, existing in the mental liminal spaces between wanting a healthy, non-diseased body and realizing that that will never occur. While this realization can be depressing, and often intimidating, I am currently processing my diagnosis and training my body to respond. Writing consists of more and more breaks, hampering my productivity. Daily tasks are more cumbersome and require more energy. Some days are better than others. Some are, assuredly, worse than others. And on those worse days, I think about how different I now am from the people around me. How I have had to change to continue to function as a successful person. How some people will never understand what I, and many others with RA, experience on a diurnal basis.

During those days where the world seems so full of hate and any shred of purpose is missing, I think about my travels in London, how a diseased body experienced the surrounding world and experienced beauty despite the pain. I constantly remind myself that there is a purpose to this, that RA has given me fuel for the fire in me that desires to write myself and my condition into existence. Through this, I am constantly learning where I fit into this world. Although only a recent diagnosis, RA has taught me the limits of my body and how this diseased body functions within normative systems. In essence, I am constantly trying to write my story and the story of my body.