Other Types of Arthritis

Arthritis is a common health problem in the US that affects more than 46 million people and results in disability for 19 million people.1 Among chronic diseases in the US, arthritis causes more disability than any other condition, including heart disease, diabetes, and back or spine problems. It leads to almost 750,000 hospitalizations and over 9 thousand deaths annually.1,2 Arthritis is associated with a substantial economic impact, in terms of health costs and lost wages, estimated at $128 billion annually.1

What Are the Early Signs and Risk Factors of Coronary Artery Disease? 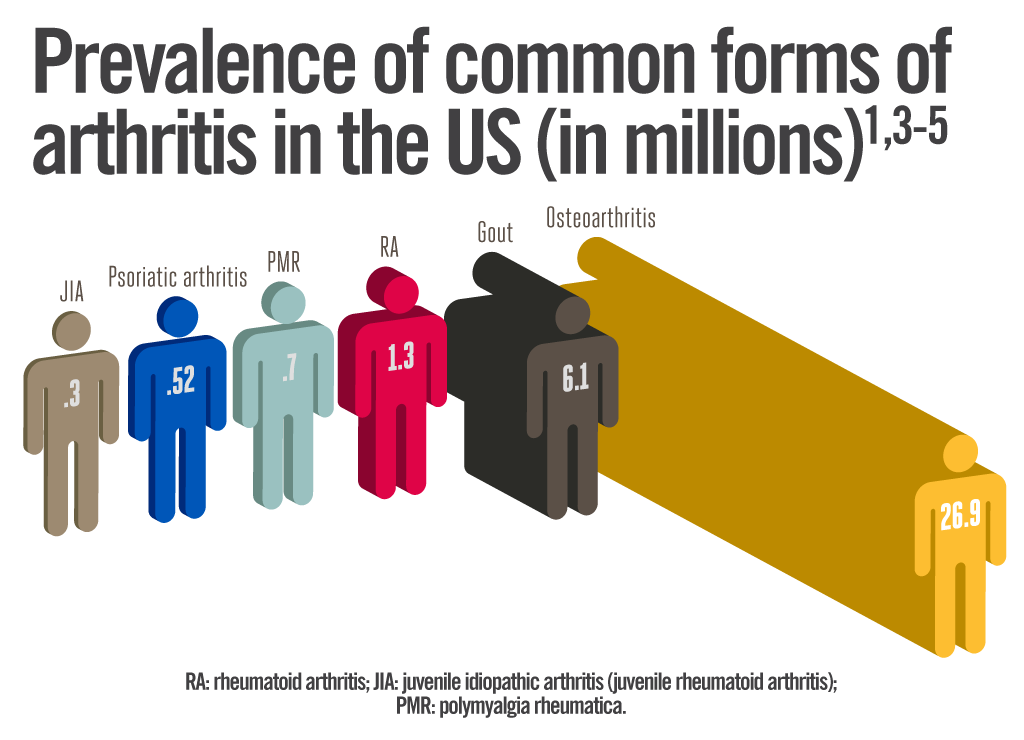 Osteoarthritis, the most common form of arthritis, is thought to result from a complex interplay of several factors including genetics, history of joint injury or trauma, patterns of joint usage, and processes that occur on a cellular level. Osteoarthritis is subdivided on the basis of the apparent cause as idiopathic (unrelated to another disease or trauma) or secondary (related to trauma or another primary disease).6

Idiopathic osteoarthritis can be limited and affect only a local area or can be general, affecting a range of joints throughout the body. Localized disease limited to a single joint, may affect the feet, knees, hands, hip, and spine, and less commonly the shoulder, ankle, and wrists. Generalized disease consists of involvement in three or more joints. Secondary osteoarthritis is linked to injury or trauma, other musculoskeletal conditions, including RA and gout, and a range of diseases, including diabetes, hypothyroidism, and congenital disorders.6

There are some recognized factors that increase risk for osteoarthritis (OA). These include increasing age, female gender, obesity, sports activities, history of injury, a family history of osteoarthritis, and occupation involving movement that exerts a mechanical stress on joints. The strongest risk factor for osteoarthritis is age, with the prevalence exceeding 80% in individuals over the age of 55 years, compared with less than 1% in people between the ages of 25 and 35 years. After age, female gender is the next strongest risk factors. Women face almost 3 times the risk for developing osteoarthritis compared with men. Obesity is the strongest of the modifiable risk factors for osteoarthritis, with risk varying by joint. The joints that face the highest risk of OA include the knees, hands, and hips.7

Gout is a condition associated with significant pain and disability, arising from chronically elevated levels of uric acid in the blood. Gouty arthritis is one of the most common forms of arthritis, characterized by attacks of acute inflammatory arthritis. Painful joint symptoms associated with gout result from the formation of uric acid crystals in the joint cavities. The same crystals may also form in the kidney or urinary tract. In fact, 15% of people with gout develop kidney stones caused by uric acid crystal formation.8

Several factors have been identified that increase risk for development of gout and gouty arthritis. These include obesity, fasting, high blood pressure, high alcohol consumption, taking medications such as diuretics that increase levels of uric acid in the blood, over-consumption of meats, seafood, and non-diet drinks containing high fructose corn syrup (eg. non-diet sodas). Additionally, in patients who have a history of gout, several factors have been identified that increase risk of gout flares. These include fasting, injury, high alcohol consumption, overeating, and use of medications that increase blood uric acid levels.8

The goal of treatment in gouty arthritis is to reduce inflammation and associated pain as quickly as possible. Several anti-inflammatory medications are typically used to achieve this goal, with the choice of medication depending on patient factors, including risk of bleeding, history of ulcer, and kidney health. Non-steroidal anti-inflammatory drugs (NSAIDs) used to treat gout include ibuprofen (Advil, Motrin), naproxen (Aleve), or indomethacin (Indocin). Aspirin is also an NSAID, but is not used in gout because it can increase blood levels of uric acid. NSAIDs are recommended for patients with no history of stomach or intestinal ulcer, who are not using an anticoagulant treatment, who are at low risk for bleeding, and who have no history of liver or kidney disease. The sooner treatment with an NSAID is started (before a full blown flare develops) the better. Other treatments for gout include colchicine, as an alternative to NSAIDs. This drug can be used safely in patients with ulcers and does not interact with anticoagulant therapy. Used at an appropriate dose, it is not associated with impairment of kidney function. Glucocorticoids (prednisone, prednisolone, methylprednisolone) may also be used to control inflammation associated with gout in patients who are not candidates for treatment with either NSAIDs or colchicine.8

Polymyalgia rheumatica (PMR) is an inflammatory arthritis (and rheumatic condition) that involves morning stiffness and pain, typically concentrated in the hips, neck, shoulder, and upper body, as well as swelling in larger joints (eg. knees) and, less commonly, smaller joints (eg. hands, feet). Swelling in the wrist may lead to carpal tunnel syndrome. The condition may affect a patient’s ability to dress or carry out certain common tasks, and may also be associated with symptoms, including fatigue, fever, decreased appetite, and weight loss.9

The symptoms of PMR typically appear in patients who are over the age of 50 years. Diagnosis is based on pain and morning stiffness on both sides of the body that lasts for at least 30 minutes and has occurred for at least 1 month. Symptoms must involve two of three areas in the body, including the hips or upper thighs, the upper body (and neck), or the upper arms and the shoulders.9

Similar to RA, psoriatic arthritis is a type of inflammatory arthritis and an autoimmune disease. It is associated with a range of symptoms involving joints, nails, and skin. These include joint pain, with swelling and stiffness; sausage-like swelling (called dactylitis) affecting the fingers and toes; ankle or foot pain; nail pitting or a separation of the nail from the nail bed; and pain affecting the lower back and tailbone.10

The precise cause of psoriatic arthritis is not known, but it is believed that the condition occurs due to a combination of genetic, environmental, and other factors. Heredity appears to play a significant role in development of the disease and may account for about 40% of the risk of developing psoriatic arthritis. Other factors such as abnormalities in immune system function or exposure to certain bacteria or viruses may also play a role in increasing risk. Results from some studies suggest that exposure to streptococcal infection may be linked to development of both psoriasis and psoriatic arthritis.11

Psoriatic arthritis is typically treated with a variety of medications that control inflammation and other symptoms, including NSAIDs, glucocorticoids, and disease-modifying anti-rheumatic drugs (DMARDs) including newer biologic treatments. Exercise and physical therapy may also provide relief of joint pain and stiffness.11

Juvenile RA, usually referred to as juvenile idiopathic arthritis (JIA), is the most common rheumatologic disease and one of the most common chronic illnesses affecting children. JIA is distinct from adult RA and covers a range of forms of chronic arthritis in children, including a wider range of subtypes than the older term juvenile RA had covered.5

As with adult RA, JIA is thought to result from a combination of genetic susceptibility and some environmental or other non-genetic factors that trigger the disease.5

JIA is defined as arthritis affecting a child under the age of 16 years that lasts for at least 6 weeks and involves at least one joint. It is characterized by joint effusion (an increase in the amount of synovial fluid in the joint) and/or presence of a combination of symptoms including limitation in the range of motion, pain or tenderness associated with joint movement, and increased warmth in at least one joint. Subtypes of JIA include systemic onset JIA; oligo JIA; polyarthritis (either RF-positive or -negative); psoriatic arthritis; enthesitis-related arthritis; and undifferentiated arthritis.5

Treatment for juvenile RA or JIA typically involves a combination of drug therapy (NSAIDs, Cox-2 inhibitors, DMARDs, biologics) and other modalities, including physical and occupational therapy and psychosocial interventions. Early detection and treatment is crucial to prevent damage to joints and other structures and growth disturbance. Recent advances in treatment, including the advent of biologic therapies, have improved the outlook for patients with JIA and, in many cases, can limit damage and allow patients to lead normal, active lives.5